Few days ago a fire destroyed Sealand, the independent state joke located on an abandoned anti-aircraft deck six miles off the British coast. The silly utopia of a data haven burned with it. HavenCo, the Sealand company running the offshore hosting service, was just a very badly planned business venture, but exotic enough to get good press coverage. 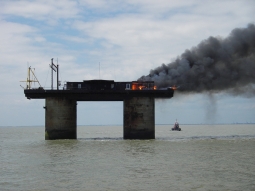 In year 2000, when Sealand was making headlines, the idea sounded a bit crooked. It was presented on Wired magazine as “a place that occupies a tantalizing gray zone between what’s legal and what’s … possible”.

Then 9/11 came, and the Patriot Act, the NSA wiretappings, data retention laws, … The whole concept of taking complete ownership of our own private information wasn’t anymore a weird and anarchic proposition. Trust in third parties handling our emails, pictures, documents and phone calls was no longer assumed. Encryption became a sensible option …

Encryption, not offshoring to a farcical Principality without a fire department!