AJAX Chat is one of the most popular project released under the AGPL license. The SourceForge stats page] shows about 200 daily downloads! AJAX Chat represents today a cool integration for several Internet forums based on phpBB, MyBB, PunBB, SMF and vBulletin. 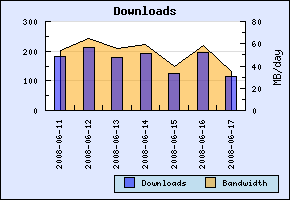 However AJAX Chat has a potential that goes beyond Internet forums: it could bring chat capabilities to any web page. It’s a great candidate for the AGPL Suite. It would also be nice to engage its developers to embrace a zero-knowledge architecture to make AJAX Chat a true off-the-record messaging system.

Its creator, Sebastian Tschan, was kind enough to answer some questions.

What is AJAX Chat and why did you start its development?

ST: It’s an open source web chat based on AJAX. At the start of its development I just wanted to learn more about AJAX. I also liked the idea of having a chat for my own phpBB based community forum which could be used with a browser and didn’t require any plugins to work.

Later I decided to release AJAX Chat as an open source project. The first release was targeted at the phpBB community. There were already some AJAX based chat applications around for phpBB, but all required some modifications to the forum software. AJAX Chat was outstanding for its extremely easy setup and the integration with the forum authentication system.

Why did you choose AGPL for AJAX Chat?

ST: The first version of AJAX Chat was released under plain GPL. As a GNU/Linux user I was already a free software fan, but I didn’t know much about the different licenses. Later I found the time to read about free software (e.g. ﻿”Free Culture” from Lawrence Lessig, articles from Richard M. Stallman) and I eventually realized what it was all about. It was then that I decided to put AJAX Chat under AGPL.

What’s your opinion about the “ASP loophole”? Do you think that AGPL solves that problem?

﻿ST: The “ASP loophole” was the very reason why I finally decided to put AJAX Chat under AGPL instead of using the GPL. I would recommend open source developers to use the AGPL for all their web projects.